Blood of Lynken books I consider to be my flagship series. They’re fantasy, relatively mainstream. Necromancers, Rangers, Magi, and Druid, plus you know guards and so on. It’s written by me, Geoffrey C Porter. Yes, based on a game I built a long time ago, but not enough to call it a GameLit or LitRPG book. 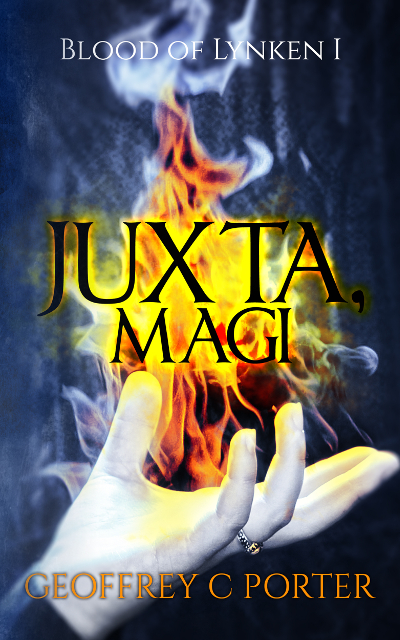 I think fantasy world building can be fun if it’s feathered in, in small doses. The first two books are multiple point of view (pov). Usually, the pov characters are powerful magic users, with just a few exceptions. The third, I break that cycle, and it’s from the point of view (pov) of a young woman who wants to get into the rangers, which up until then was a boys club.

I like the later books better, but I’ve been poking around inside Juxta, Magi messing with the ending, changing scenes around for almost twenty years. It makes sense I like the newer stuff better. Juxta, Magi is special to me in many ways.

They tell us in writer school, if you’re talking about yourself as a writer, you should refer to yourself in third person. So please pretend when I say “I” or “me” I’m secretly saying, Geoffrey C Porter.

Magic comes from all around the caster or from a god, or from within. A nice rage boosts spell casting ability in these books. Energy can come from trees.

I write the books I want to read. This is one of the core foundations of writing. This is a multi-facetted thing. On one side, you’re your number one reader, you’re going to be inside these books poking around, changing scenes, bug hunts for grammar and typos, so many times. Do I even need a second reason, if you actually read the first?

I guess some writers are different, and they write the draft and off to an army of editors. I enjoy that side of it, polishing and refining the books. This goes beyond copy editing, line editing, and development editing. Literally rounds of revision, feathering in thoughts and playing with dialog action or beat or tags, and flesh added to descriptions.

I’ve got other stuff though that is niche oriented.

The action is fun, the friendships feel real, but my intent is a comedic take on tropes.

This is kind of my genre. This is where I feel comfortable. Think Sin City except the bad guys are all zombies or vampires or beasts. This is likely my favorite niche genre.

I truly focus in these books into making them about more than slaying. Making friends, being a team, saving the world, are my major plot tropes when I write these.

My stories are character based. I like inviting the readers into my main character’s mind. I build those connections, and I do it with thoughts and dialog. My books are littered with thoughts on almost every page, but no Italics. I think the thoughts should blend seamlessly with the narration.

I’m not a huge description writer. It’s far less important to me than other character development or world building. But you get older, and you learn that almost all readers want at least a little description on all characters. You cannot just drop a name in the books and say that’s all the reader gets (unlike some of my early drafts).

I’ve built a few worlds. I try not to overdo it. In terms of importance, it’s about third on my list. Characters, Plot, World. With maybe friendship in there somewhere, subset of characters.

Wars in my books

Juxta is a citizen of Lynken. He serves the crown. It seems his country gets in a few wars. I try to make the opposing army motivation realistic and true, versus just a bunch of people running into meat grinders.

My vampire slayer stuff is a big war against vampires.